What is the timeline for responding to an Advisory Action (AA)?

The deadline for response to an AA is six (6) months after issuance of the FOA.  This deadline is not extendable.  If an Advisory Action has not been received, and the six-month deadline is approaching, the Applicant may file a Request for Continued Examination or an appeal to ensure the Applicant’s response to the FOA is accepted before the application becomes abandoned.

What is the optional 2-month deadline for responding to an FOA?

If the FOA response was submitted by the optional 2-month deadline, extensions of time fees for filing an RCE, if required, are calculated from the mailing date of the AA. 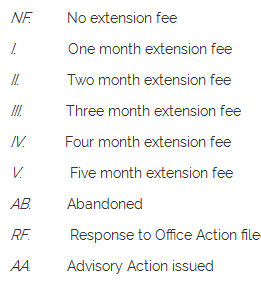 However, if the FOA response was submitted after the optional 2-month deadline, the extension of time is calculated from the date the response to the AA is filed.

What is an Information Disclosure Statement (IDS)?

An IDS is a submission to the USPTO by the Applicant to disclose references known to the Applicant and “material” to patentability.  This disclosure is meant to satisfy the “duty of candor” owed to the USPTO under 37 C.F.R. 1.56.  An IDS often includes, for example, references that are cited in Office Actions of related applications.  The requirements for submission of an IDS depend on the time period during which it is submitted.

When is an IDS due?

An IDS is due during the pendency and prosecution of any patent application.  An IDS may be submitted any time before a first Office action issues, but thereafter, must be submitted within three (3) months of discovery of a material reference.

What are the requirements for filing an IDS?

An IDS includes a listing and copies of references material to patentability, and an English language translation of at least the abstract of any references that are not in English.  A certification and fee may also be required depending on when the IDS is filed.  For example, after the first Office action is filed, the Applicant must certify that the references became known to the Applicant within three (3) months of filing the IDS.